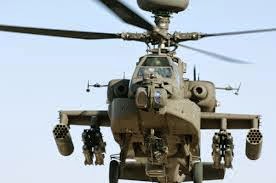 An Israeli media has revealed that the United States of America has stopped Nigeria’s purchase of Chinook military helicopters from Israel to fight Boko Haram.


The development is being reported barely twenty four hours after the US Secretary of State, John Kerry promised his country’s determination to work with Nigeria and other countries in putting an end to the activities of the Boko Haram terrorists group at a meeting with President Goodluck Jonathan and former Head of State, General Muhammadu Buhari (Rtd).

An official within the President Barrack Obama’s administration told ‘The Jerusalem Post’ that any sale or transfer of such aircraft required a review by the US, to determine its “consistency with US policy interests.”

According to White House Assistant Press Secretary and Director for Strategic Communications, Ned Price, reviews of such usually take place in any requests for one country to transfer US originated defence items to another country.