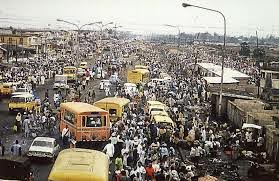 Fight broke out, yesterday, between a group of boys and suspected cult members at Afariogun area of Oshodi, Lagos, leaving one person dead and several others severely injured. About 40 vehicles were also destroyed by the rampaging youths. Some buildings were also torched and shops looted.


A staff of Vanguard, Nicolas Esekhile, his wife and two-year-old child narrowly escaped death after the suspected members of Aiye confraternity shattered his louvers with machetes in an attempt to break into the house.

Report said trouble started at about 11p.m., Monday, between some boys from Orile-Oshodi and Afariogun, at a naming ceremony of one Jimoh Odekunle at Okeleye Street, Afariogun,with the cause unknown.

In the process, one Kamoru, said to have been severely injured, died in the early hours of yesterday, in an undisclosed hospital around the area, where he was rushed for treatment.

When news of his death filtered in yesterday, his colleagues from Orile-Oshodi reportedly embarked on a reprisal attack.

Their first port of call was reportedly the residence of one Sunday Anajonu, alleged to have been responsible for the death of their colleague.

But for the timely intervention of policemen from Akinpelu Division, Anajonu would have been lynched by his assailants.

When Vanguard visited the trouble zone at noon yesterday, some of the residents were discovered to have fled their abodes for fear of being entangled in the warring factions’ web.
Over 40 vehicles and about 20 buildings were destroyed.

Eyewitness account
An eyewitness, who spoke on condition of anonymity, revealed that the fight was between the host and some suspected cult group.

The elderly woman said: “The cultists came at about 11pm, when the party was about winding up and started shooting at residents.

“They tried to break into a hotel around the area but could not. They looted shops, whose owners had locked up for the day, and invaded a restaurant where they collected the money realized for that day. They were over 50 in number.

“They went to the refrigerator, brought out the drinks and attacked people with the bottles.

It was gathered that his wife and baby were lying on a couch close to the window in the living room, when the rampaging cult groups embarked on the destruction.

But for divine intervention, the matchet would have reportedly landed on Mrs Esekhile or her baby.
When approached, Esekhile, who was too stunned to speak, only muttered “I thank God that members of my family are alive to recount the ordeal.”

He said only one person died in the fracas and not the three making the round.

“Police from Akinpelu swiftly rescued him and took him to hospital, where he is currently being treated. From our record, only one person was killed.

“Five persons have been arrested in connection with the incident and are undergoing interrogation as investigation to unravel the immediate and remote cause of the matter has commenced immediately.
“Normalcy has been restored in the area through patrol and surveillance and further efforts are being made to arrest anyone connected with the incident.”

Source:
Vanguard Newspaper
Posted by Don Okereke at 7:08:00 am