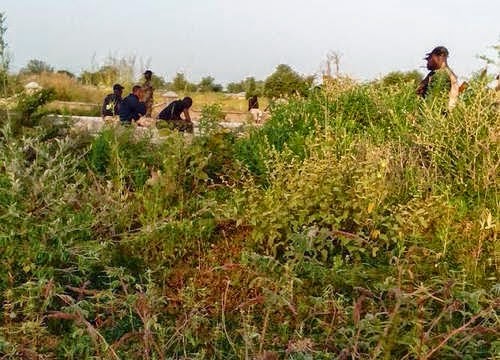 SaharaReporters has learnt that Boko Haram militants may have kidnapped 18 female soldiers in Baga in Borno State, according to information from military sources. Two sources told SaharaReporters that, out of 26 female soldiers posted to the military base of the Multinational Joint Task Force, only eight have so far been accounted for.


The commander of the troops in the area, Colonel Kuti, has also not been found since the insurgents attacked the town on Saturday.

Nigerian army Residents of Baga told our reporters that Boko Haram insurgents invaded their town and killed at least 55 people, including soldiers attached to MNJTF. Both residents and security sources said the insurgent attack lasted close to 18 hours before the Islamist terrorists overpowered the troops and seized the military base.

One military source said the attack took them by surprise. He said the troops made a gallant effort to repel the attack, but that hundreds of Islamist militants stormed the military base with high-caliber weapons. A resident revealed that the invading insurgents also burnt down parts of the fishing town.

Bukar Kaka, a fisherman who fled from the town, said no fewer than 50 villagers, including five soldiers, were killed while others sustained wounds in the attacks. He said he saw soldiers fleeing. A military source disclosed that some fleeing sources were headed for Monguno barracks near Maiduguri, the capital of Borno State.

The fisherman said Boko Haram militants sacked the troops from the barracks, with the soldiers fleeing into various locations. “A lot of us found ourselves in the bush. In fact some of them removed their uniforms,” said Mr. Kaka.

A security source said the insurgent invaders also stormed other neighboring communities, shooting indiscriminately at people. He added that the militants also destroyed hundreds of houses and shops, often using fuel and other explosive devices.

In an interview with the British Broadcasting Corporation (BBC), Senator Maina Ma’aji Lawan confirmed the insurgents’ attack on Baga and surrounding towns. He added that military troops and youth volunteers, popularly known as ‘civilian JTF, had attempted to repel the onslaught, but were overpowered by the invaders.

“This is indeed a sad moment for my people who were plunged into bloodshed by the insurgents. Security forces with active support of the youth have been working hard to protect the area from several attacks in the past. But due to the large number of the terrorists and dangerous weapons they used in the latest onslaught these patriotic persons were unable to resist them,” Mr. Lawan said.

“We are calling on the Federal Government to provide relief materials for the displaced persons and expedite action [to] liberate the area so that our people can return to normal life,” the senator added.

Boko Haram insurgents had attacked Baga on three previous occasions over the past one year, leaving more than 300 people dead.

Source:
SaharaReporters
Posted by Don Okereke at 4:15:00 am