Biafra: Nigeria On The Brink 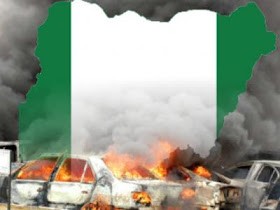 Introduction: More than one hundred years after disparate nation states with dissimilar cultures, religion, and values amongst others were forcefully amalgamated by British colonialists for administrative convenience, hegemonic aggrandizement and fifty years after a three year civil war, Nigeria simultaneously grapples with insurgency, terrorism, militancy, instability, and recurring agitation for the balkanization of the country. Most of the issues that led to the Nigeria-Biafra civil war were glossed over, remain unresolved. At the end of the civil war the then Head of State, General Gowon bandied the three R’s - reconciliation, rehabilitation and reconstruction - which turned out to be mere clichés, unfulfilled promises.
There was no reconciliation, no rehabilitation and definitely no reconstruction. My father told me how they were given only twenty pounds irrespective of how much they saved up in the banks. They moved on but the scar endured. Fifty years after the Nigerian civil war, Ndigbo of southeast Nigeria don’t have a sense of belonging in Nigeria. They are alienated, marginalized and subjugated as a conquered people. In the United States, pupils and students are taught about the American civil war but in Nigeria where it appears we have a phobia for history and the truth.

Food for thought: ‘’As long as poverty, injustice and gross inequality persist in our world, none of us can truly rest’’ – Nelson Mandela
Only a fool keeps doing the same thing again and again and expects change’’ – Albert Einstein?
Nigeria’s Is More Fragmented Than Ever Before
Nigeria has always been a country divided along religious, ethnic lines but it appears the Buhari administration by acts of commission and omission, exalted the inherent schism in the Nigerian polity. Shortly after the 2015 general elections in Nigeria, former Chief Justice of Nigeria, Justice Dahiru Musdapher asserts that the 2015 Presidential election further divided Nigeria, as the election was marked by demarcations along ethnic, regional, partisan and religious lines. Speaking as guest speaker at a lecture organized to mark the 75th birthday of the father of former Speaker of House of Representatives, Chief Alani Bankole, in Abeokuta; Musdapher said “it is rather worrisome that after over 100 years since the amalgamation of the northern and the southern protectorates in 1914, Nigerians seemed as divided as ever.” “I am scared and deeply worried”, he said, adding that “the situation is grave.” Bishop Matthew Kukah of the Catholic Diocese of Sokoto also iterated that Nigeria is now a more divided country. The mutual suspicion, distrust, lack of cohesion, marginalization, subjugation, religious intolerance and indigene-settler dichotomy continued to widen.

Date: May 30, 2017, Event: 50 years anniversary of the declaration of Biafra Republic by late Colonel Chukwuemeka Odumegwu Ojukwu. Outcome: more than 90% compliance in the entire Southeast Nigeria sequel to a sit-at-home directive by Biafra activists such the Indigenous People of Biafra (IPOB), amongst others. French News Agency - AFP reports that Biafraland was shutdown for the Biafra anniversary. Why criminalize the individuals/groups whose only sin is agitating for self-determination? Similar to the IPOB sit-at-home order, the six Yoruba states in southwest Nigeria declared June 12, 2017 a public holiday in remembrance of Chief MKO Abiola's botched presidential mandate. Have we forgotten how NADECO and other groups in southwest Nigeria agitated, gave Babangida and Abacha regimes sleepless nights after the junta annulled the June 12, 1993 election result acclaimed to have been won by Chief MKO Abiola, a Yoruba man?

Date 6th June, 2016: seemingly rattled by the successful sit-at-home order and compliance in the southeast on 30th May, 2017, an amalgam of recalcitrant Arewa Youth organizations comprising – the Citizens Action for Change, Arewa Youth Consultative Forum, Arewa Youth Development Foundation, Arewa Students Forum and Northern Emancipation Network on the Igbo Persistence for Secession met at Arewa House in Kaduna state and inter-alia, gave Ndigbo living in northern Nigeria October 1st, 2017 ultimatum to vacate northern Nigeria. We have no moral latitude to criticize South Africans for launching sporadic xenophobic attacks on Nigerians living in their country when blatant xenophobia is entrenched in Nigeria. While some northern governors tried to douse tension arising from the 'Igbo quit notice' by Arewa youths, it is apparent that the youths have the backing of some powerful northern elders. Their action is tantamount to the "voice of Jacob but the hand of Esau". Where were the Northern governors when a band of the youths met at the esteemed Arewa House and issued a quit notice to Ndigbo? Is Arewa House so porous that anybody or group of people can access it and hold meetings? An Igbo proverb says, ‘’when you see a bird dancing by the roadside, it's highly probable that someone within is beating the drums for the bird’’. Spokesperson of the Northern Elders’ Forum (NEF), Prof. Ango Abdullahi vehemently supports the Arewa youths quit notice. Could it be that these Arewa youths want to hit up the polity, a subterfuge to justify a putsch in Nigeria especially given the fact that political power is slipping away from the north due to Buhari’s illness. Insinuation of a possible coup was rife in Nigeria recently. Three weeks after the threat on Ndigbo, none of the masterminds have been arrested or questioned by Nigerian security and intelligence agencies mostly headed by Northerners. This contrasts the hostile treatment meted out to Biafran activists.

The Nation Newspaper reports that, Nigerian Security agencies advised the Nigerian government against arrest northern Youths who issued the threatening quit notice order on Ndigbo. Northern politician and a second republic lawmaker, Dr. Junaid Mohammed says there will be crises if police arrests Arewa youths. Question is: did those Arewa youth groups transgress the laws of Nigeria? Are they above the law? Has the security agencies arrested anyone in the past who seemingly committed a similar ‘crime’? It will be deemed an ‘injustice’, partiality if someone from the southeast, southwest or south-south dangles a similar threat to northerners and s/he is arrested? If the security agencies cannot arrest the Arewa youth, it follows that they will not dare re-arrest Nnamdi Kanu who has obviously violated the terms and conditions of his bail. The apparent impunity, near absence of rule of law and recent sequence of events in Nigeria symbolizes a failing/failed State or a banana republic. Afenifere chieftain, Senator Femi Okurounmu queries why the Inspector General of Police is unable to arrest these Hausa-Fulani youths who issued the quit notice? Continuing he said, ‘’we are just deceiving ourselves; there is no justice in Nigeria. When a Hausa-Fulani man kills another Nigerian, he has not committed an offence, but when another Nigerian kills Hausa-Fulani man, he has committed an offence and must be punished. That is the Nigeria of today for you’’. Also recall that when Hausa and Yoruba folks clashed at Ife in Osun state, only Yoruba people were arrested and detained by the security agencies.

The Arewa youths threat to Ndigbo should be taken seriously and not waved aside. This is how the pogrom of Ndigbo in northern Nigeria started in 1966 which spurred the declaration of Biafra in 1967. As we know, street urchins in the north otherwise known as Almajiri are well-known for their ‘herd mentality’.  Almajiris only hear ‘’go’’, they don’t hear ‘’come’’. The Nigerian government that is struggling to contain a localized Boko Haram insurgency say there is no cause for alarm. Ndigbo have a proverb that it is only a tree that you will threaten to cut down and it would remain immobile, defenseless.

Despite the intensely visible handwriting on the wall that Nigeria is coming apart at the seams, rather than acknowledge the home truth, take tangible steps to fix the problem, politically correct Nigerian leaders who like Emperor Nero fiddled while Rome burned, bury their heads in the sand like an Ostrich reciting trite clichés such: ‘One Nigeria’, ‘the unity of Nigeria is non-negotiable’. Senate President, Dr. Bukola Saraki reiterated one of such trite remarks recently when he asserted that, ‘’the unity of Nigeria was not negotiable and “must be defended by all, in spite of numerous agitations.” I think it is an indictment on the validity and usefulness of the legislature and other elected officials that the masses and activities of separatist groups such as the IPOB resurrected the need to rejig or restructure Nigeria. A new power bloc is emerging in Nigeria due to widening purposeful and visionary leadership vacuum. Proponents may not be elected officials or moneyed but it is evident that their narratives and actions overshadows the legitimacy and narratives of the State, its institutions, and so-called elected officials, bureaucrats and oligarchs who only care about their personal aggrandizements and how to bequeath power to their children.

Nigerian Government Negotiates With Terrorists, Militants But Not With Unarmed Separatist Agitators

Posterity will always remember that the Nigerian government negotiates and allegedly pays ransom to a terrorist organization. Same government negotiated with Niger Delta militants to enable free flow of crude oil but the government is disinclined to negotiating with Biafran agitators. The notion is that the only language the Nigerian government appreciates and respects is wholesale violence. The special adviser to President Muhammadu Buhari on political matters Mr. Babafemi Ojudu gave hogwash reasons why the leader of the Indigenous People of Biafra (IPOB), Mazi Nnamdi Kanu was not invited to the Presidential Villa when the Acting President, Professor Osinbajo held a meeting with southeast leaders. Mr. Ojudu reportedly asserted that, ‘’Nnamdi Kanu was not asked to join the acting president and the South-East leaders in a meeting because the IPOB leader is not perceived as a leader of thought in the South-East’’. Continuing Mr. Ojudu said, ‘’…what we have done is to look at people who have influence in the communities, whether it is religious, whether it is traditional, whether it is political, social or governance’’. By their estimation Nnamdi Kanu doesn’t fit into any of the aforementioned pecking order? Fortunately or unfortunately, the Buhari administration inadvertently made the IPOB leader a folk hero. They should see and treat him as such. If he’s not a social or political leader, how do you explain the fact that this unelected guy that was almost a nobody a couple of years ago and his IPOB group issued a sit-at-home order and the entire southeast was totally shut down on 30th May, 2017 to mark the 50th anniversary of Biafra? Rhetorical and wishful press releases are not the panacea to the impending implosion of Nigeria, genuine action is. As long as injustice, inequality, nepotism, bald-faced marginalization and subjugation of sections of the country persist, jamboree meetings with northern and southeastern governors will yield little or nothing.

Stop the rhetoric. Stop the tea parties. Stop treating symptoms of the disease. Stop postponing the evil day. Come down from your high horse. Make hay while the sun shines. Genuinely fix the root causes of instability in Nigeria. This is the only way to avoid the seemingly impending anarchy, balkanization of Nigeria. Ka Chineke mezie okwu.