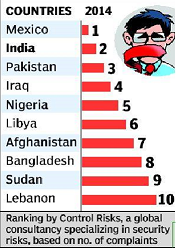 The ranking is published by Control Risk, a UK-headquartered consultancy organisation which chronicles reports of abductions. It is often referred to by international reinsurers for providing ‘kidnap and ransom’ cover to both Indian and MNCs.

Insurers said this does not mean that neighbouring countries like Afghanistan or Pakistan are any safer. What it indicates is that the number of complaints about kidnapping is higher in India. Although it may not be an organised business the way it is in some South American countries, there are many incidents that take place in the north and the east. A little wonder that India is now seen as a ripe market for selling kidnap and ransom (K and R) insurance policies.

“The rankings are based not on insured events but on actual cases reported. India stands out because of the sheer numbers and the vast spread of the population in remote areas,” said Sanjay Radhakrishnan, CEO of JLT Independent Insurance Brokers, who said the Indian arm of UK’s JLT Group which has been arranging K and R cover for corporates for 25 years.

Image Credit: Times of India
Don Okereke at 9:27:00 am
Share